The Rev. Lucius Walker, a Baptist minister, was the guiding star of Pastors for Peace Cuba Friendshipment Caravan. He died of a heart attack last September but his spirit lives on through the Caravans that continue to travel to Cuba without the required license to protest the US blockade of Cuba. The Caravans take tons of humanitarian aid and expose the caravanistas to the human side of Cuba. Walker once said, ''The Bible says feed the hungry, clothe the poor, it doesn't say to starve the Communists.'
In 1988, Lucius was on a fact-finding trip in Nicaragua where rebels were battling the American-backed government. Their riverboat was attacked by government soldiers and he was wounded. His first thought, he said, was that he was hit by a bullet paid for by his own country. He called his second thought a prophetic vision: he would form an organization of pastors to fight, or at least clean up after, what he called American imperialism.
That organization, Pastors for Peace, has now sent hundreds of tons of aid, including medical gear and roofing material, to Latin American countries. Of its 40 missions so far, 21 have been to Cuba, which under a 1963 law is off-limits to American trade.
When Granma, the Communist Party newspaper in Cuba, announced his death, it said Cubans ''don't want to even think of a world without Lucius Walker.''
I met Lucius in 2007 when I traveled with the Caravan to Cuba. I invited him to Colorado Springs where he met with folks who were supporting efforts to lift the embargo. Loring Wirbel interviewed him in this video.
In 2007, under the leadership of Rev. Faye Gallegos, Christ Congregational UCC, Pueblo, initiated efforts that resulted in over $50,000 worth of humanitarian aid which was loaded on one of the Caravan's buses bound for Cuba. Since then we have bought and equipped three buses, one of which was mostly paid for by First Congregational Church, Colorado Springs, and sent them to Cuba. The latest one, shown here, is now being used by an orthopedic hospital in Havana.
In these pictures you see the caravanistas being briefed by Rev Walker as they prepare to cross the border back into the US after a tiring but exciting trip. Having defied the embargo/blockade we would soon face US Customs officials and possible penalties. As it happened, we returned to the US without incident. You also see one of the caravanistas making friends with one of the Cuban children. The embargo still exists but the hope is that, one day, Americans and Cubans will be able to travel legally to visit one another as friends beyond borders. 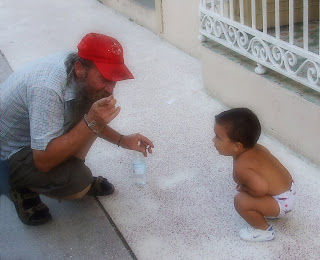 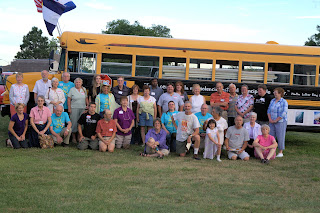 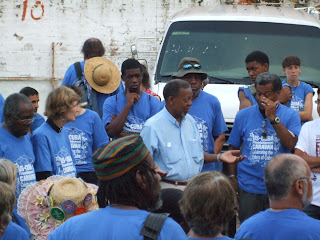