John Lennon and I met on a park bench in Cuba 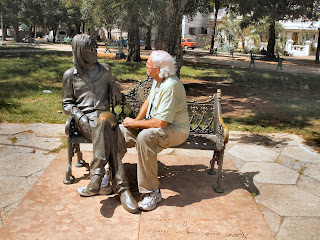 The Day I Met John Lennon
In July, 2007, 130 of us, mostly nortamericanos, loaded 100 tons of humanitarian aid onto a freighter in Tampico, Mexico bound for Cuba. Then, defying the US imposed embargo, we boarded an Ilyushin 62 Russian-built jet, operated by Cubana Airlines, and made a quick flight across the Gulf of Mexico to Havana where we spent nine days exploring the Cuban psyche and culture. The freighter would unload the aid later at the Martin Luther King Center in Havana and the aid we had collected would be distributed to those most in need. After a three-day visit to the Sancti Spiritu Province, I was in Havana strolling through a public park in the El Vedado section when I came upon this bronze statue of John Lennon. I was a little taken aback because I had remembered that the Beatles were persona non grata, at one time, in Fidel's revolutionary Cuba. A friend took this picture of me pretending to be in conversation with Lennon and we moved on.
I didn't think any more about it until I looked at my pictures when I got back home. I was right about Fidel and the Beatles. In the early days of the Revolution, he had declared the Beatles to be symbols of Western decadence and had forbidden their music to be played in Cuba. Years later, he came to see John Lennon as a true revolutionary and so identified with him that in 2000, he dedicated this statue.
I decided to return to El Vedado in my mind and imagine what a conversation might have been like, if, in fact, he were alive and the two of us could have shared a few moments on that park bench.
For one thing, I would have asked him to say more about his song, Imagine. I would also have asked what he thought of Fidel dedicating his statue and claiming a visionary kinship with him.
I suspect he might have been a little uncomfortable claiming kinship with the belligerent and, at the least, one-time violent leader of the Revolucion. Maybe, I'm wrong but it would have been interesting to hear his response. Fidel is on record as regretting his persecution of gays and lesbians. That's something. And he credits Imagine with impacting his life. I would like to have a heart-to-heart talk with Fidel about that but I think I there's about as much chance of that happening as getting a response from a bronze statue.
Speaking of a response from Lennon, since it really did stretch even my imagination to have him sing, I found this rendition on YouTube and downloaded it for your reflection.
I resonate with the idea of Living for today. Somewhere in the Book of Proverbs there is the phrase, “Where there is no vision, the people perish.” In our efforts to envision a future of a peaceable kingdom, it is so easy to put it all in the future. Living for today, pulls us back to the idea that we can begin living the vision in the here and now. Peter Drucker once wrote that the best way to predict the future is to create it.
John Lennon opens the dreaming to everyone who chooses to walk the path and share the work and wonder of a better world. One of the compelling reasons I chose to join with Pastors for Peace in their efforts to lift the economic blockade of Cuba is that I resent efforts by both governments to keep their respective citizens apart. I am committed to doing whatever is within my resources to make friends beyond borders.”
I enjoyed my visit with John Lennon. I hope you will do the same.
Posted by Max at 4:55 PM