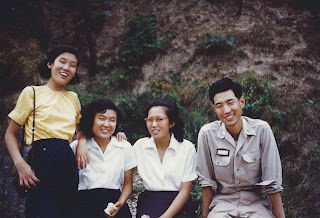 The Korean War has been called, by those who don't know better, “The Forgotten War.” Those who do know better know it will never be forgotten. As recent rumblings from Pyongyang remind us. I spent most of 1952 in the Land of the Morning Calm, mostly in and around Pusan and Taegu and once, for a short time, near the 38th Parallel. You will understand why today's threats from North Korea take me back to that other time.
I carried an M-1 US Army issued rifle. But unlike those who battled in the frozen hills of the 38th, I walked the streets of Taegu, a city teeming with refugees and infiltrated with guerillas. I have no wounded in action or pinned down under fire experiences to relate. I was one of the lucky ones.
For ten months I lived in sight of abject suffering and violent death, daily. I will never forget that. But, today, I choose to remember the resilience, hope, and humor of a handful of Koreans I was lucky enough to know as friends for a season.
I was an Assistant to Chaplain Foy Thomas, a Methodist preacher from Texas. The Chaplain had organized a chapel choir of US Army personnel and Korean civilians and one Lieutenant in the Korean (ROK) Army. Thursday nights I rode as armed escort on a bus through the alleys of the city to pick up the Korean choir members.
That was when I met the Moon sisters and their brother. Myung, the fifteen year old, was the most vivacious. She's on the left in the picture. Next to her is Chun, her older sister, who was battling tuberculosis at the time. Miss Choi, a refugee from north of Pyongyang, sits next to Chun and Lee, the brother is at the far right. The father, a banker, had been killed in the war and the mother and her three children had taken refuge in Taegu. The mother did not speak English but her children had studied English for several years and spoke it well. I saw Myung, Chun, and Lee on Thursdays and Sundays for most of the time I was there. Lee once invited me to eat at the ROK Army mess hall—an invitation I appreciated and an experience I never wanted to repeat.
One night, after choir practice, I heard Myung talking excitingly to several of the other Koreans. I asked her what was going on and she said her high school was having an English speech contest. She asked if I would be a judge. I agreed.
The theme was “How I spent my summer.” I was to judge them on their English. Their English was pretty bad, but their speeches made any American high school speech pale by comparison. That night in Taegu, I heard about parents and friends being killed and maimed, of survival on grub worms and ditch water, of teachers being taken captive. I heard the horrors of a Civil War through the mouths of suffering teenagers.
I had come to Korea with doubt and anxiety. I left with equally strong and mixed emotions. I would be reunited with family and friends in America, but I was leaving friends I would never see again. A six-foot Chinese refugee cooked the shrimp, we sang Korean folk songs, Chaplain Thomas even took a few sips of the rice wine, and Myung gave me the scroll you see in the picture. (It was one of the few possessions that survived the constant relocation of the family as the battle between the North Korean communists and the United Nation troops went back and forth up and down the peninsula.)
I have no idea what the characters to the right of the scroll say. When we re-hung it the other day in our new home, I thought, “One of these days, I'll have it interpreted.” (I've thought that off and on over the years.) But then, I probably won't. I only know that it was in the Moon family for many, many years and that it was a gift from some very special friends. That seems enough for me. 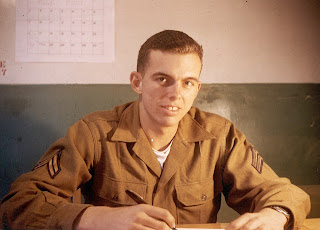