I suppose that, for some, the light has gone out, but I believe that within most of us there are the embers of hope for a world of beauty and purpose. Don Quixote fans the fire as he sets out to right the wrongs of the world. His vision is that he sees the world as it ought to be. His failing is that he is unable to see the world as it is. It seems to me that he wanders back and forth across the line between madness and vision. Or can it be that he has such a strong internal vision that he sees through the illusion of those of us who have resigned ourselves to lives of hopeless reality? Is he a madman, a hero, or a holy fool? I truly don't know. Does it matter? What does matter is that Don Quixote is set free in our imagination to help us discover a new quality of the human spirit.


I'm not sure I can go so far as to claim Don Quixote as a patron saint but for those of us who struggle to rise above our very real limitations to act for a world of beauty and purpose, his is a powerful voice.


Now let's get specific. For going on six years now there has been a multi-million dollar lobbying effort to create a 5.3 billion dollar project to link Canada's oil sands with refineries on the Gulf Coast. Environmentalists oppose the Keystone XL project because of the obvious harm it will do to our land and its people. Some have said that to oppose the pipeline is like 'tilting at windmills,' to use a Quixotic reference. Maybe, maybe not. This is one the people of vision might just win.


If you want to weigh in on the controversy, please check out www.boldnebraska.org 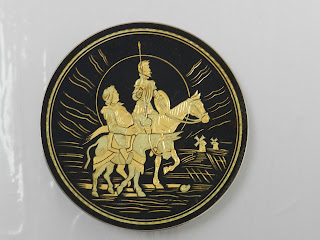 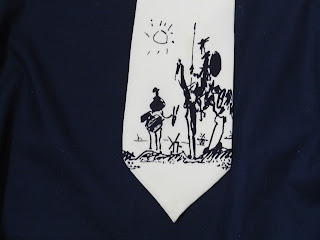 I picked up the plate in a gift shop in Moron, Spain.  My sister gave me the tie.  She said it reminded her of me.  I don't know if she was referring to Don Q, Sancho, or Rocinante.  I do know she loves me.